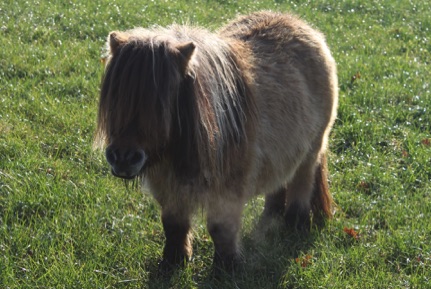 The real origin of the Shetland pony is not entirely clear. It is said that they have been transferred from Scandinavia to the Shetland islands, north of Scotland, thousands of years ago, but that has never been proven. However, it is certain that they have been living on these Shetland islands for at least 4000 years. The Shetland ponies soon became very strong and tough because of the poor conditions in which they lived on the islands. There was little food and the heavy weather did not make it easy. But the strongest ponies survived and have adapted to their environment. So now they have long, profuse mane and in the winter they get a thick, double coat.

Later, around the 1840s, the ponies were used in the coal industry because from then on, it was forbidden for women and girls (later also for boys). The Shetland ponies were, of course, very suitable for this job because of their small, strong stature which made it possible to transport the heavy loads of coal through the tunnels.

Only from 1880 onwards, they began with the breeding of Shetland ponies on the islands. The first Stud-Book, “The Shetland Pony Stud Book Society” (1890), was soon founded, and strove to breed more ponies of good quality again.

The ponies that were kept by the inhabitants, were mostly used as saddle and draft animals, but also to carry seaweed and peat.

Currently, there are still 1500-2000 ponies living on the Shetland islands, but due to the export from the islands, the Shetland pony is spread and known all over the world.

The Shetland pony is characterized by its ‘rugged’ look. He is small (height up to 107 cm), has powerful gaits and movements, a short and heavy neck, strong legs, a small head and small ears. The mane and tail should be thick and profuse and the coat changes according to the season. In the summer they have a short, glossy coat and in the winter a thick, double coat.

It is said that the Shetland pony can be ‘difficult’ and ‘stubborn’, but that is, of course, for a large part the result of how they were raised. A character trait that occurs in almost each and every pony is curiosity. Furthermore, they get along with everyone and they are very affectionate, especially with children. In my opinion they are all lovable, and with a little upbringing and sufficient attention from day one, the Shetland pony will be a friend for life.

Generally, there is not a lot of work to take care of Shetland ponies. If they have a stable/cabin to shelter and a meadow with some grass in, they are all happy. Nevertheless, there are a few things to which each owner should pay extra attention.

First of all, grass contains a lot of protein during spring and summer, and this is dangerous for the ponies. It is also not smart to mow the meadow short during this period, because there are a lot of sugars in these short blades of grass. A pony that has had too much grass with protein and sugars, can get laminitis. People should be very careful since many Shetland ponies are susceptible to this. When winter comes and there is little food in the meadow, one must feed the ponies with hay, grains (mix), beet or pulp and maybe a few carrots (not too much). Bread is allowed, but should be limited (eg. 1 piece per pony per day) and it must be very hard! Foals are allowed to eat more energy-rich food and can stay on a good meadow (basically to 1.5 - 2 years). They are preferably fed with foal grain or a good horse mix (without oats).

It is necessary though, to occasionally brush the mane and coat, especially during winter to prevent tangles. They really enjoy this.

The stables must always be cleaned and manure must be taken out of the meadow regularly to reduce the risk of worms. To achieve the latter, one must also worm the ponies quite often (up to 4 times a year or manure examination by the veterinarian). When ponies are not or too little wormed, it can have serious consequences (eg. Colic). In many cases it is too late for the pony when the worms break out and so it is fatal. People should know that there are different rules for worming foals than there are for adult ponies. It is therefore crucial to know when and how the ponies should be wormed. Everyone does this, of course, their way, but it is useful to have some sort of scheme so one can see properly when which wormer should be used for which pony. After some research and advice, I have designed such a scheme, which we use for our ponies as well. If you like to take a look at this scheme or use it for your pony(ies), you can always contact me and I will send it to you. People who buy a pony from us, also receive it.